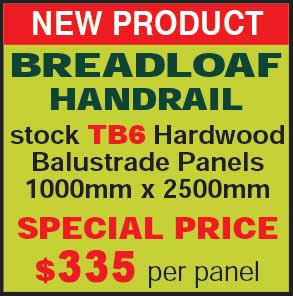 The Woodworkers FAQ sheets cover almost anything and everything you need to know about joinery. Please feel free to download and use them to get answers to all the questions you ever had about joinery. If you need further help send us your inquiry using the form on this page.

WHO ARE THE WOODWORKERS? 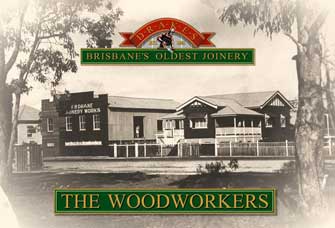 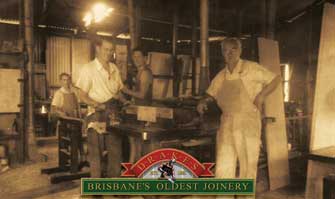 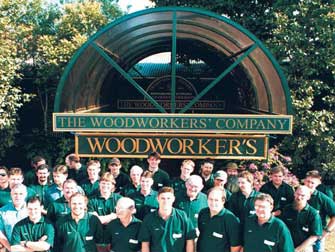 Woodworkers is a 100% Australian owned family company formed from the amalgamation of several older timber joineries and retailers including Drakes Joinery, Yandina Joinery, Sargoods Joinery, Beautwood, Sydney’s World of Wood and the Gold Coast Door Shop. Our original Drakes joinery workshop at Moorooka is Brisbane’s oldest surviving joinery in continuous operation since 1928. Many of the designs that are the hallmarks of the Queenslander architectural style were originally made in this workshop and the same techniques continue to be used today. It is Queensland’s largest manufacturer of solid timber joinery with approximately 100 skilled trades people and staff in 5 factories in Australia.  The company also operates supply chain factories in Indonesia and China that feed the Australian factories with stock and componentry. Woodworkers has showrooms in Brisbane, Sydney, Southport and Maroochydore. We also have distributors strategically positioned throughout Queensland, New South Wales & Western Australia.

Most import joinery uses the term, ‘solid timber’ deceptively.  It may be solid but is it one piece of timber? Engineered doors are actually laminated finger jointed timbers of mixed species covered with a thin face veneer. Woodworkers doors, unless specifically noted (i.e Vista / Fuseon), all use solid natural timber for all their structural components and purpose made cedar plywood for panel work.

IS ALL JOINERY AUSTRALIAN MADE?

No. Although we locally manufacture more joinery than anyone else, we also operate offshore factories to control our supply chain for both timber and manufactured items such as hardware. As 95% of all timber used in joinery is imported, Woodworkers complies with the World Bank guidelines for sustainable resource management and controls its timber supplies at source to ensure that 100% of every log gets used. It consequently prepares and dries timber off shore and recycles all offcuts into smaller manufactured items such as sashes, which it imports for Australian assembly. This unique system is  not only environmentally responsible but also keeps the jobs in Australia and our prices low. Woodworkers also has the capability to supply custom made joinery offshore for larger projects - discussed separately on FAQ 25.

WHAT IS THE DIFFERENCE BETWEEN IMPORTED AND AUSTRALIAN JOINERY?

Virtually all doors retailed in Australia by groups like Bunnings, Doors Plus etc are fully imported. There are also importers who masquerade as auction suppliers who source their products in Vietnam, Indonesia and China. The Australian Standards make the entity that hangs the window or door responsible for its compliance, so import retailers limit their liability to the product rather than the collateral damage that leaking joinery can produce. Because Woodworkers has tested its joinery to AS2047 and is an accredited member of WADIC (Window and Door Industry Council) it fully warranties its product. Because of these responsibilities, Woodworkers uses Australian supervision to oversee its import products and ensures they are made to a higher standard than our competitors and to a quality equivalent to our local manufacture.

HOW DO WOODWORKERS COMPARE WITH OTHER AUSTRALIAN MANUFACTURERS?

Most Australian manufacturers are highly reputable and produce a reliable product to achieve compliance with Australian Standards. Most of the larger producers e.g. Stegbar, Trend, Hume and Corinthian manufacture or import engineered product and use mass production joint systems heavily reliant on adhesives for strength. Their product can fairly be said to be built to a price and life expectation defined in their warranty but not generally longer. On a smaller scale, there are a number of traditional joinery manufacturers that produce a quality product and to compare them you need to consider the following issues 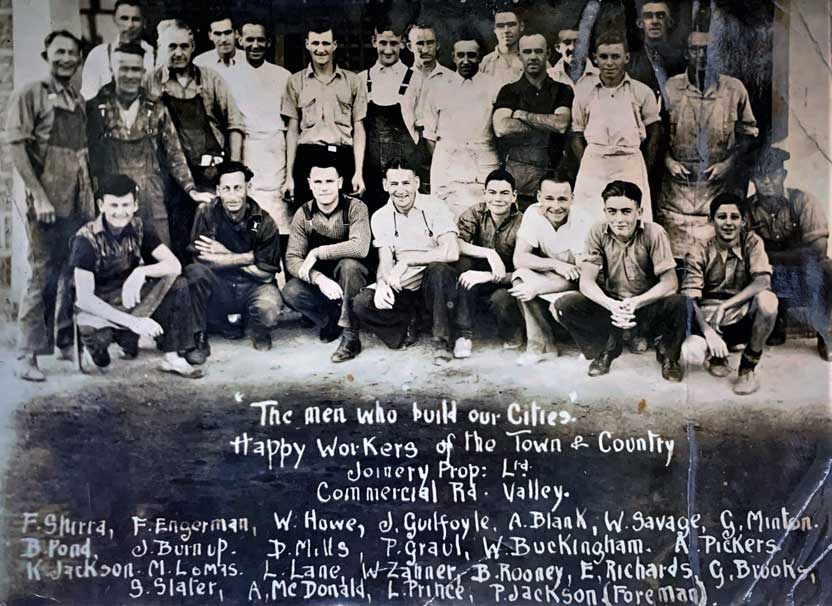 ‘Original photo of Town & Country Joinery staff taken in the 1930’s. Some of the staff, including Percy Jackson, (far right), and his son Ken Jackson, (third from the right, back row), went on to manage the original Woodworkers Drakes factory for most of the decades from 1940 until 1986.’ 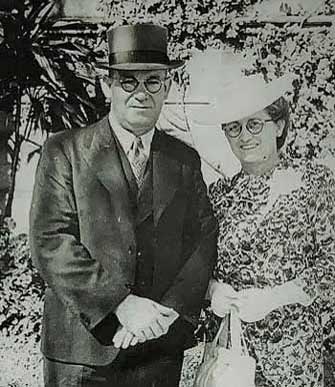 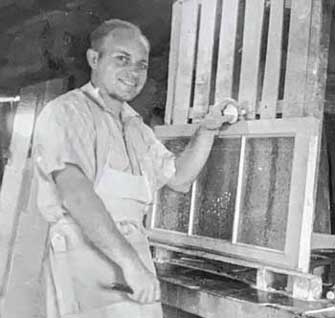 The original Drake’s Steam Joinery Works, the oldest surviving joinery in Brisbane, was established in 1928 by Frank Drake. Frank came from a pastoralist background and his joinery skills were largely self-taught. At age 28 he spent £145 buying the land and hand built the factory, which still exists to this day at Ipswich Road Moorooka. Frank slept on a hammock in the back corner of the factory for several years while slowly building his business and reputation.

Most of the cast iron machinery still in use in the original factory dates from this era, originally driven by long leather belts connected to a (still existing) ceiling drive shaft powered by a steam boiler situated under the workshop floor. Frank had been engaged since 1927, and in 1930 he finally started construction on the house adjacent to the factory to settle his new bride. This original house (with alterations) is now the Brisbane joinery showroom.

The fledgling Drakes Joinery however was hammered by the economic depression of the 1930’s and the outbreak of war in 1939. Frank Drake was forced to sell the premises to the more established Town & Country Joinery Company & turned to the land at Eidsvold where he died in 1960. Some of his tools remain on display in the Brisbane Showroom.

The Town & Country Joinery Group was the major industry force of its day based in Commercial Road, Fortitude Valley. Because of its enviable reputation for fine workmanship, Drakes continued to operate as an independent workshop under the management of Town & County’s head foreman of Percy Jackson from 1940 to 1948.

The entire timber joinery industry fell on hard times from the 1950’s however, due to the onslaught of cheap aluminium product, forcing Town & Country to close its doors in 1966. Drakes small size and versatility ensured its survival under the foremanship of Ken Jackson, son of the original manager, who operated it from 1960 to 1986. The business operated independently until 1997 when it merged to become The Woodworkers Company. The bulk of manufacturing relocated to newer premises at the rear of the old factory where it remains headquartered to the present. The original factory continues its unbroken joinery manufacturing history however, but has been restored and preserved as befits Queensland’s oldest surviving joinery. 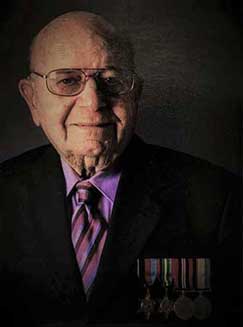 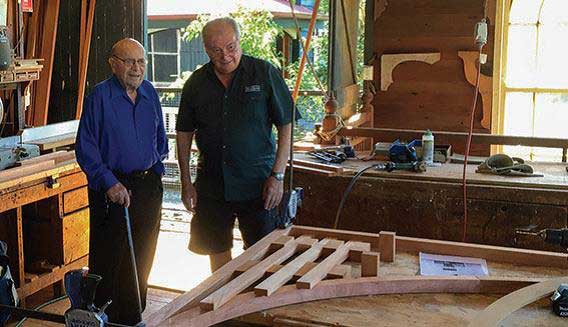 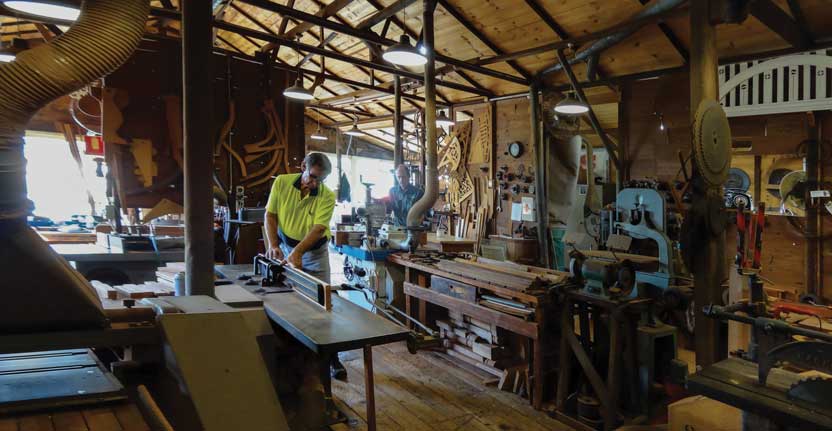